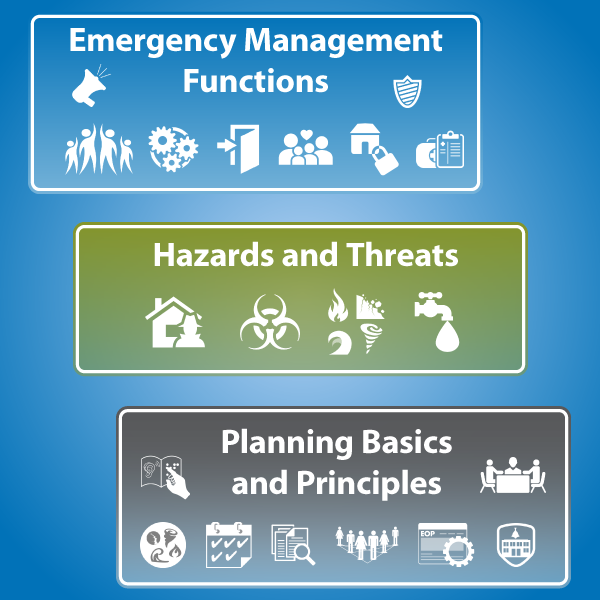 School EOPs should include courses of action that will describe how students and staff can most effectively respond to an active shooter situation to minimize the loss of life, and teach and train on these practices, as deemed appropriate by the school.

No single response fits all active shooter situations; however, making sure each individual knows his or her options for response and can react decisively will save valuable time. Depicting scenarios and considering response options in advance will assist individuals and groups in quickly selecting their best course of action.

Understandably, this is a sensitive topic. There is no single answer for what to do, but a survival mindset can increase the odds of surviving. As appropriate for your community, it may be valuable to schedule a time for an open conversation regarding this topic. Though some parents or personnel may find the conversation uncomfortable, they may also find it reassuring to know that, as a whole, their school is thinking about how best to deal with this situation.

During an active shooter situation, the natural human reaction, even if you are highly trained, is to be startled, feel fear and anxiety, and even experience initial disbelief and denial. You can expect to hear noise from alarms, gunfire and explosions, and people shouting and screaming. Training provides the means to regain your composure, recall at least some of what you have learned, and commit to action. There are three basic options: run, hide, or fight. You can run away from the shooter, seek a secure place where you can hide and/or deny the shooter access, or incapacitate the shooter to survive and protect others from harm.

As the situation develops, it is possible that students and staff will need to use more than one option. During an active shooter situation, staff will rarely have all of the information they need to make a fully informed decision about which option is best. While they should follow the plan and any instructions given during an incident, often they will have to rely on their own judgment to decide which option will best protect lives.20

It is not uncommon for people confronted with a threat to first deny the possible danger rather than respond. An investigation by the National Institute of Standards and Technology (2005) into the collapse of the World Trade Center towers on September 11, 2001, found that people close to the floors impacted waited longer to start evacuating than those on unaffected floors.21 Similarly, during the Virginia Tech shooting, individuals on campus responded to the shooting with varying degrees of urgency.22 These studies highlight this delayed response or denial. For example, some people report hearing firecrackers when in fact they heard gunfire.

Train staff to overcome denial and to respond immediately, including fulfilling their responsibilities for individuals in their charge. For example, train staff to recognize the sounds of danger, act, and forcefully communicate the danger and necessary action (e.g., “Gun! Get out!”) to those in their charge. In addition, those closest to the public address or other communications system, or otherwise able to alert others, should communicate the danger and necessary action. Repetition in training and preparedness shortens the time it takes to orient, observe, and act.

If it is safe to do so for yourself and those in your care, the first course of action that should be taken is to run out of the building and far away until you are in a safe location.

Students and staff should be trained to hide in a location where the walls might be thicker and have fewer windows. In addition:

If neither running nor hiding is a safe option, as a last resort when confronted by the shooter, adults in immediate danger should consider trying to disrupt or incapacitate the shooter by using aggressive force and items in their environment, such as fire extinguishers, and chairs. In a study of 41 active shooter events that ended before law enforcement officers arrived, the potential victims stopped the attacker themselves in 16 instances. In 13 of those cases they physically subdued the attacker.23 While talking to staff about confronting a shooter may be daunting and upsetting for some, they should know that they may be able to successfully take action to save lives. To be clear, confronting an active shooter should never be a requirement in any school employee’s job description; how each staff member chooses to respond if directly confronted by an active shooter is up to him or her. Further, the possibility of an active shooter situation is not justification for the presence of firearms on campus in the hands of any personnel other than law enforcement officers.

20 As part of its preparedness mission, Ready Houston produces “Run, Hide, Fight” videos, handouts, and trainings to promote preparedness among residents of the Houston region. These materials are not specific to a school setting but may still be helpful. These videos are not recommended for viewing by minors. All of these items are available free of charge, and many are available at http://www.readyhoustontx.gov/videos.html

21 Occupants of both towers delayed initiating their evacuation after World Trade Center 1 was hit. In World Trade Center 1, the median time to initiate evacuation was 3 minutes for occupants from the ground floor to floor 76, and 5 minutes for occupants near the impact region (floors 77 to 91). See National Institute of Standards and Technology, 2005. Federal Building and Fire Safety Investigation of the World Trade Center Disaster Occupant Behavior, Egress, and Emergency Communications. Available at http://www.mingerfoundation.org/downloads/mobility/nist world trade center.pdf